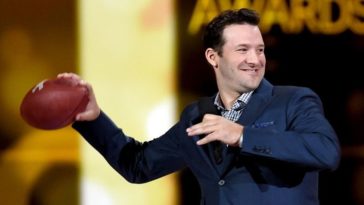 Much of this year’s NFL offseason has been centered around speculation on where Tony Romo would end up. Romo lost his job last year after getting injured early in the preseason and rookie, Dak Prescott, performed so well that Romo never regained his starting job.

There wasn’t much a quarterback controversy in Dallas. Romo accepted that Prescott had won the job and he accepted his backup role as the Cowboys were playing excellent football. They ended up narrowly losing to the Packers in the playoffs, but it had been their most successful season in quite a while. 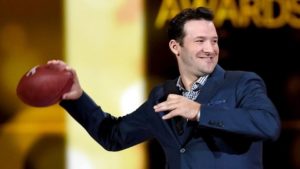 Romo announced today that he wouldn’t be going to another franchise, but instead, has opted to retire. After playing just five games in the past two seasons, sources close to him say that his health and family are now the most important thing in his life.

While Romo’s playing career is finished, he is making a move to the broadcast booth. He will replace Phil Simms as an NFL broadcast analyst for CBS and will work along, Jim Nantz. It’s a bold move for CBS, considering Romo has no broadcast experience.

Many sportsbooks offered up odds on where Romo might end up playing in the 2017-18 NFL Season. We speculated on this back in February. Retirement wasn’t even a betting outcome for many books when handicapping what team he might go – making this outcome an unlikely one.

Texans Top Choice Off the Market?

After the Texans traded quarterback Brock Osweiler the Browns, in what was essentially a salary dump – they become the front runners for Romo’s services. Betting markets agreed, moving their odds from 40-1 to 20-1 after the team made a move to deal Osweiler on March 10.

Currently, both BetOnline and Bovada have the Texans at 16/1 to win Super Bowl 52. The odds market has reacted, and they don’t find Romo’s retirement too worrisome for Houston’s prospects in the coming season.

With Romo no longer an option, the Texans have just two quarterbacks on their roster, journeyman, Brandon Weeden and Tom Savage. Even those most optimistic about the two quarterbacks would be hard-pressed to say that either of them is “bridge” quarterback until the Texans find a young starter, like 36-year-old, Romo, would have been if he had signed with Houston.