Home » Blog » The Most Cursed NFL Teams – Read Before Betting!

The Most Cursed NFL Teams – Read Before Betting! 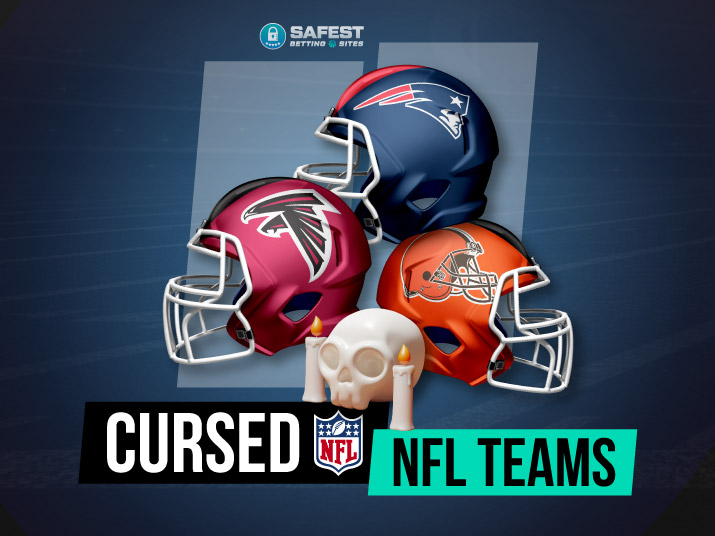 Are there cursed teams in the NFL? Is that a thing? Yes, there are. And yes, it is a thing.

Some franchises seemed to have pissed the football gods, and these have tormented their fan bases since.

How do you get out of the most cursed NFL teams list? Nobody knows. That’s why the same teams tend to remain on this list every year.

This blog post will rank the most cursed NFL teams and why they are on this list. Beware!

Best Sites To Bet On The Right Teams

What Makes An NFL Team Cursed?

A cursed team cannot win a championship, no matter how hard they try. The reasons are lousy management, terrible decisions, and, of course, bad luck.

A cursed team could have everything in place to make a run at the championship, and for some reason, they find a way to fail. And believe me, they will fail miserably.

Top 5 Most Cursed Teams in the NFL

The following list includes all the work done by a franchise throughout its history.

A team with a current good roster could be on this list just because their suffering past transcends their present.

With that in mind, let’s start.

Aren’t the Buffalo Bills the favorites to win the Super Bowl? Yes, they are. But their recent success doesn’t erase a lifetime of franchise-crushing defeats.

Buffalo is one of the few NFL franchises that has never won a Super Bowl, but it goes beyond that.

They are the only team in NFL history to reach four straight Super Bowls and lose all of them. ALL. OF. THEM.

The Bills started their Super Bowl curse with the kick from Scott Norwood that would have given them their first SB win back in 1990. Instead, it went wide right.

Then Washington and Dallas gave them recurrent SB losses in the following three seasons. It was painful to watch.

Since then, the Bills fan base gets hunted because they are the only team in the AFC East division without a championship ring.

Also, in 1999, they were on the wrong side of the Music City Miracle. The Titans’ special teams beat the Bills in the playoffs with a last-second backward pass that saw WR Kevin Dyson take it to the house to win the game. It was madness.

Following that loss, they missed the playoffs for 18 straight years. Even worse, their nemesis, the New England Patriots, won six Super Bowl championships in the same span.

Lastly, in 2021, they seemed like they were returning to the AFC championship game. Yet, Kansas City’s QB Patrick Mahomes drove his team 44 yards in 13 seconds to tie the game in a divisional round thriller.

Mahomes and the Chiefs took the game to overtime and won it there. The Bills find new ways to lose in the playoffs every time they have a legitimate chance to win it all.

Bet Against The Bills At BetUS

The Atlanta Falcons have been a decent team in recent years, but they can’t escape the NFL cursed teams list after Super Bowl LI.

Atlanta will likely own the biggest choke job in Super Bowl history. With a 28-3 lead early in the third quarter, the Falcons allowed 31 unanswered points from the New England Patriots to lose the biggest game of the year.

The Falcons are yet another NFL team without a Super Bowl victory. They have played two and lost both. However, that loss against the Patriots gets framed as the most unfortunate result in the franchise’s history.

In their 55 years of existence, the Falcons have compiled a 379–487–6 record. They also drafted QB Brett Favre and let him go to Green Bay, where he had a legendary career.

The Falcons also had Michael Vick as their QB and couldn’t pull anything out of him.

The horrible decisions and bad luck led to the franchise’s demise. However, nothing tops the performance in Super Bowl LI. Nothing.

Bet Against The Falcons At BetUS

How do I know your NFL team is cursed?

Well, you didn’t honor the football gods, and now you are paying the price. The Cleveland Browns are paying that price.

In 1995, the then Browns’ owner, Art Modell, had a falling out with the city of Cleveland. Modell took the franchise’s rights and moved the team to Baltimore, where he created the Baltimore Ravens.

The move left the city of Cleveland without a football team for three years until the NFL gave them an expansion berth to rebuild the Browns. But since then, they have been one of the worst franchises in the league.

The franchise has also started 32 different QBs since 1999, the most by any team during that span. For example, a team like the Green Bay Packers has only had two quarterbacks since 1992.

In 2017, the Browns became only the second franchise in NFL history never to win a game during a season, posting the forever shameful 0-16 record.

Finally, they are one of four teams that never appeared in a Super Bowl. Forget about winning it. They have never played in one.

You can’t make a list with the NFL’s most cursed teams and not include the Minnesota Vikings.

The Vikes have been a playoff guest 30 times but have never won the Super Bowl. Unlike the Browns, they reached the big game, only to get disappointed in the aftermath.

They are the team with the highest regular season record and combined winning percentage among NFL franchises that have not won a Super Bowl.

How is that possible? Well, alongside the playoffs’ appearances, Minnesota has the most playoff losses by any team in NFL history, with… you guessed it: 30 eliminations.

With the Vikings is not only the number of playoff losses but how they lost. Some of them are just brutal.

Should I keep going? Because I have more. So much more.

And if I dig a little more, I’m sure I can’t find even more dirt. The Vikings are for sure one of the NFL’s most cursed teams.

Fans can argue the Detroit Lions have brought all the bad luck on themselves.

They are the only franchise in NFL history that has made two Hall of Famers quit in the prime of their career.

The Lions had RB Barry Sanders and WR Calvin Johnson walk out of the league because they couldn’t take all the losses.

Since 1957, Detroit has won one playoff game, and it was during the 1991 season. That’s it, just one since 57. The Lions hold the league’s longest postseason win drought.

They are one of the four franchises, alongside the Cleveland Browns, Jacksonville Jaguars, and Houston Texans, to have never played in a Super Bowl.

They were also the first franchise to post a 0-16 record in the league’s history in 2008. Nine years later, the Cleveland Browns joined the party.

Detroit’s postseason losses haven’t been as crushing as the ones suffered by Buffalo and Minnesota, but it’s because they don’t get into the playoffs.

They drafted QB Matthew Stafford in 2009 and were mediocre with him during 11 seasons. As soon as Stafford left Detroit, he won the Super Bowl with the Rams.

It’s like the football gods have forgotten about the Lions. That’s how much they are cursed.

Bet Against The Lions At BetUS

Bonus: What Is The NFL’s Luckiest Team?

Once one of the most cursed teams in the NFL, the New England Patriots have become one of the luckiest teams in recent years.

Over and over, things go their way. It’s not all luck. Don’t get me wrong. They are outstanding, but some bounces have gone their way.

Although I’m sure some Patriots fans can also find many bounces against them.

Bet On The Patriots At BetUS

Best Sites To Bet Against The Most Cursed NFL Teams

Use the NFL-cursed teams as a precautionary tale of which teams to bet on and which to avoid.

If you don’t know where to bet, below you will find the top offshore sportsbooks to wager during the football season.

Choose any of these sports betting sites, and don’t forget to claim your welcome bonus when signing up:

Read Our Review Of The Best NFL Betting Sites

My Team Is Cursed… What Should I Do Now?

I understand that calling teams cursed seems a little dramatic until you talk to a fan of the franchises above.

It’s going to take a lot to end their drought, but it’s possible. Just ask the Saints fans who were on this list recently.

Now, if I must pick a team that will drop out of this list, it is the Bills. They are the Super Bowl betting favorites, and if they prove the oddsmakers correct, we will have to update this ranking a year from now.

Bet On The Buffalo Bills At BetUS

Improve Your Game With Our NFL Betting Hub 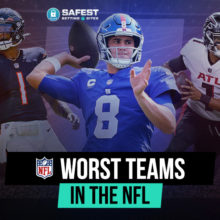 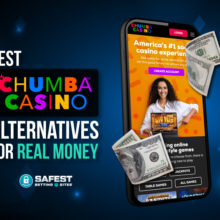