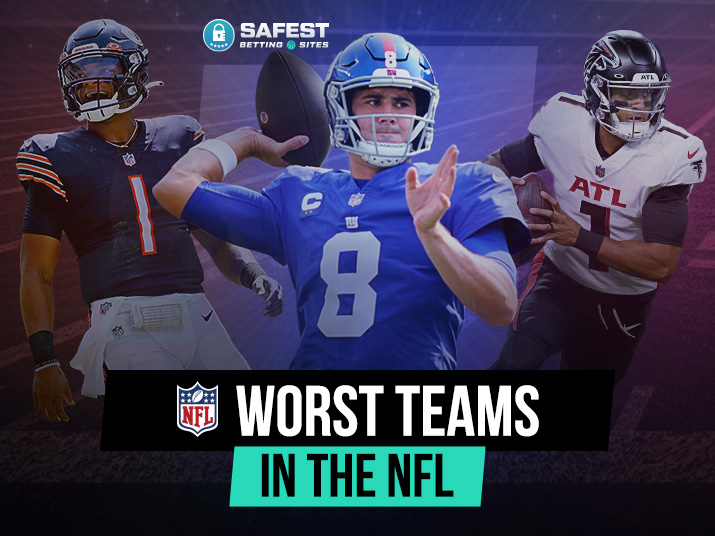 It’s embarrassing, even if your team is purposely losing to get a better future, which is the case with many names you will find in this blog post.

Nevertheless, every franchise in this ranking has a deserving spot, mainly because their front office has done a brutal job of putting together a competitive team for the 2023 season.

You can use this information to bet against them, lineup fantasy football players the week they face any of these names, or just make fun of their fans. That last one is my favorite.

Worst Teams in the 2023 NFL Season

Most of the franchises on this list are low on talent and have drafted poorly over the last few seasons. They usually overpay free agents to compensate.

But in the end, their rosters look underwhelming in every key position.

The worst part is most of these franchises will try to reboot only to find themselves in the same spot a few years later.

It’s an annual tradition for the Jets’ fans to see their team mentioned as one of the worst teams in the NFL.

They have the longest postseason drought in the league, missing the playoffs every year since 2010.

One can argue that the NY Jets drafted well in 2022, and their team could be better.

Yet, their biggest problem remains the QB position as second-year quarterback Zach Wilson will miss the season’s first two months.

Wilson underwent knee surgery, and there are now significant concerns about whether he is the guy to lead this team or not.

His replacement is former Super Bowl MVP Joe Flacco, who is entering the 2022 season at 37 years old, with only six TD passes in each of the last two seasons.

Although the Jets have a more talented roster than in previous years, it is unlikely they will do anything with it.

If they don’t fix their quarterback spot, there’s no reason to believe they will be a good squad in 2022.

The Jaguars are the epitome of a bad franchise. They are always in this situation.

Since 2008, the Jags have had one winning season, another one with a .500 record, and 12 losing seasons. It’s unbelievable.

They drafted poorly and had to compensate overpaid mid-level talent in free agency.

What did $280M buy you in 2022? Well, wideouts like Christian Kirk, Zay Jones, and tight end Evan Engram.

Those names will never ring a bell to the average NFL fan, and it’s because none are stars, let alone superstars.

Like the Jets, Jacksonville also must find out if their second-year QB Trevor Lawrence is the right guy to lead this franchise.

Lawrence got a pass in 2021 because former HC Urban Meyer ran the team to the ground with his terrible judgment.

Yet, I’m not sure Trevor will get the same treatment in 2022 if he leads the NFL in interceptions for the second year in a row.

Bet Against the Jaguars At BetUS

This offseason, the NY Giants took the first step in trying to fix the mess the former general manager, Dave Gettleman, left after 2021.

Daboll is the Giants’ fourth head coach since they forced out Tom Coughlin after the 2015 season.

Since 2017, the Giants have the NFL’s single worst win rate in home games, winning just 12 of 40 games at MetLife Stadium.

They are also the ONLY TEAM in the NFL not to have even one week where their record was above .500 at any point in the last five years.

That’s both unsurprising and embarrassing. But it’s an accurate statement of the horrible job Dave Gettleman did as a GM during the time he was in New York.

Another shocking stat from Gettleman’s tenure is the Giants are the team paying the most money to their wide receivers in 2022.

Last season, those same wideouts accounted for only five TDs in the entire season, the fewer by any team in the NFL.

Brian Daboll is an offensive mastermind that fixed Josh Allen in his third year in the league. He now gets a chance to fix Daniel Jones. If he succeeds, somebody must build him a statue.

But let’s be real here. The Giants’ roster makes it impossible to imagine a competent season.

The Seahawks are not used to getting a mention in the conversation of the worst team in the NFL 2022.

But you don’t trade one of the best five QBs in the league for pennies and expect to be better.

Seattle has a plan on its mind. At least, that’s what head coach Pete Carroll keeps saying, although how good can your plan be if it doesn’t include Russell Wilson to lead your team?

Yeah, I’m a little pissed that the Seahawks sent Wilson to Denver. Do you know how hard it is to find a good QB in the NFL draft?

Well, Russell Wilson wasn’t only a good quarterback. He was the franchise’s best QB ever.

Now they will try to replace Russ with Geno Smith. Geno has been in the league since 2013, dancing around teams while finally landing in Seattle in 2019 as Wilson’s backup.

Smith has thrown 34 touchdowns and 37 interceptions over his entire career. He’s not the future solution for Seattle, but more like this is what we have for the time being.

Because no one expects Geno Smith to be good, Seattle is doomed to have a bad year in 2022. It’s part of their plan as they look to select a new QB in the 2023 NFL draft.

Yet, even if they have a top pick to choose the next face of the franchise, there is no guarantee that the player will be as good as Russell Wilson.

The Texans have been in rebuilding mode for the past three seasons.

It’s a long process after the disaster left by former head coach and GM Bill O’Brien.

Houston didn’t have first-round picks in 2020 and 2021, which left the team with one of the worst rosters in the NFL. The reason?

O’Brien exchanged those picks to acquire average players that are no longer with the team.

Houston’s GM to earn his money

Houston hired the Patriots’ director of player personnel, Nick Caserio, to do an overhaul.

Before accepting the job, Caserio said he wouldn’t sign his new contract if he didn’t get at least six years to work.

He mentioned he needed time to undo what O’Brien did. The 2022 season will be only his second year on the job, so there is still a long way to go.

That’s why no one is surprised the Texans’ roster lacks superstar talent and why everybody expects them to be one of the worst teams in the NFL in 2022.

In fact, the Texans are the odds-on favorite to finish with the worst record in the NFL at +275.

Bet Against Houston At BetUS

What the Bears franchise has done to Justin Fields is criminal.

Last year Matt Nagy had one of the worst game plans I can remember when the Bears recorded just 47 total yards in the loss to the Cleveland Browns.

Nagy refused to game plan based on Fields’ unique skills and threw the rookie out there to get eaten by the lions. It was shameful.

Luckily for Justin Fields, Chicago fired Matt Nagy. The team hired Matt Eberflus as the new head coach, and while that might be good news in the future, it doesn’t look that way in 2022.

Eberflus is a defensive-minded coach with zero experience as a head coach.

He drafted two defensive players in the second round of the 2022 draft following the side of the ball he dominates. He forgot about the needs on offense.

Not a Fields’ Day

In case you were wondering why he didn’t use the first pick of the 2022 draft, well, the Bears didn’t have a first-round pick because they traded it to draft Fields in 2021.

Now Justin Fields will go into his sophomore season with a different head coach again.

Chicago is also home to the NFL’s worst offensive line, with arguably the lowest talent at the wideout position.

Fields will have a miserable 2022, thanks to the mishaps of the Bears organization. The worst part is people will blame the young QB because that’s what fans do.

Instead, history should remember that the franchise failed the quarterback, not the other way around.

Other than tight end Kyle Pitts and cornerback AJ Terrell, the Atlanta Falcons have nothing to be hopeful about in 2022.

Sure, those two players could be the franchise’s future, but that future looks far away.

Remember we discussed the Texans are the favorites to end with the worst record in the NFL?

Well, the Falcons are their number one challenger at 3/1.

Atlanta’s idea is to test a few young players in 2022 and see what they have for 2023. Winning games this season is not a goal.

Actually, the fewer wins, the better, as they look to add a QB in the 2023 NFL draft.

The Falcons have one of the weaker NFL rosters this year, and it’s by design.

Two drafts ago, they could have gotten a QB in the first round of the 2021 draft, but they picked Kyle Pitts and paired him with veteran QB Matt Ryan.

Now Ryan is in Indianapolis, and they missed the chance to have their QB of the future.

Atlanta will select their new QB in about eight months, and then we will see what they do in free agency to improve their weak roster. But for now, they have one of the worst NFL teams in 2022.

Bet Against the Falcons At BetUS

Bonus: Who Is The Best NFL Team This Season?

The Buffalo Bills will open the season as a top-flight team in the NFL.

They are the odds-on favorites to win the Super Bowl for a reason.

Buffalo is loaded on every position, and QB Josh Allen is also the favorite to win the NFL MVP award at +700.

He’s a top-five quarterback with a real chance to give the Bills’ fans their first Super Bowl win.

The Bills should be the best team in the NFL this season.

Anything below a Super Bowl appearance will be a failure.

Bet on NFL Teams at These Top Online Sportsbooks

Now that you know the worst teams in the NFL for 2023, you can use that information to bet against them.

Below, you will find the best NFL sportsbooks where you can wager on football all day long.

Stay Tuned for Our Next List of Bad NFL Teams!

All these teams are here for a reason. They’ve made poor decisions in the past few years, and now they have to look into the mirror to see where it all went wrong.

They belong on the list of bad teams in the NFL. Yet, they don’t need to be there a year from now.

Let’s meet back here after the season to see who climbed out of this shameful list. 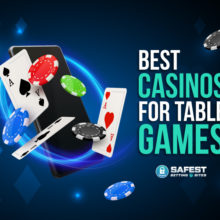 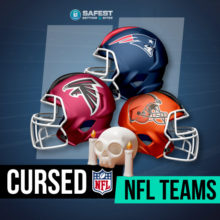 The Most Cursed NFL Teams – Read Before Betting!