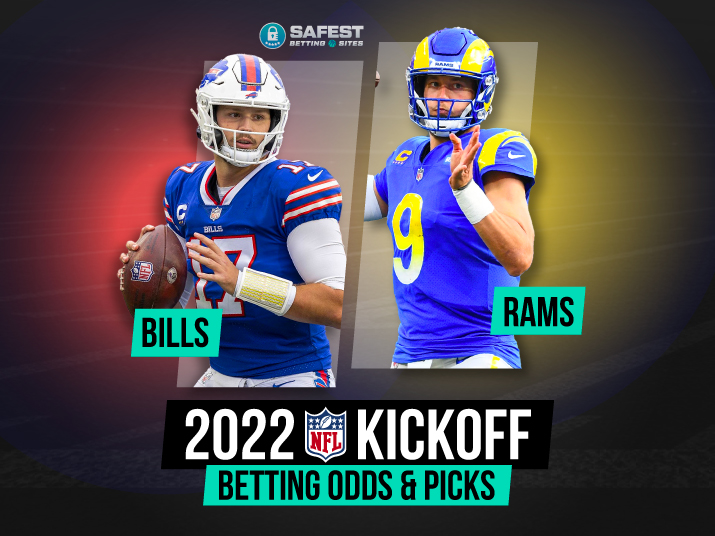 The NFL 2022 kickoff is around the corner, and we are here to tell you how to bet on the first game of the season.

We’ll have the kickoff game Thursday evening in Los Angeles, when the defending Super Bowl Champions, LA Rams, clash against the Buffalo Bills in a tasty opening game.

Below you fill a breakdown of the game, including the latest Bills vs. Rams betting odds and predictions.

Where To Bet On The NFL Kickoff Game

When the betting line for this game opened back in May, the Rams opened as a 1-point favorite. It’s been a while since then.

If you plan to bet on Buffalo, it’s better to do it now. Many are jumping on the Bills’ hype train as they are the odds-on favorites to win the Super Bowl, listed at +650 at BetUS Sportsbook.

The game total is currently sitting at 52 points with a standard price of -110 on either the over or under. Unlike the spread, the total hasn’t moved since it opened.

As mentioned above, the Bills are the clear favorites to win Super Bowl 57. No one’s surprised, considering how loaded they are on both sides of the ball.

Buffalo’s loss to Kansas City last season in the divisional playoffs round was heartbreaking. Yet, Buffalo made some moves in the offseason to be even better in 2022.

Miller has experience in big games and is ready to take his new team to the next level. His addition complements a Bills defense ranked first in total yards and points allowed in 2021.

A Roster Loaded With Talent

Buffalo added veteran guard Rodger Saffold on offense to solidify the o-line. The Bills’ offense averaged 28.4 points per game in the 2021 regular season, but the expectation is they will be even better in 2022.

Buffalo averaged 44.5 points per game in two postseason games last season after the breakout showing of WR Gabriel Davis. In the divisional round, he scored 4 TDs in the epic match against Kansas City.

Of course, the Bills’ offense starts and ends with QB Josh Allen. He’s the odds-on favorite to win the 2022 MVP award, listed at +700.

Allen had 36 TDs and 15 INTs last season but took his game to the next level in the playoffs. He recorded 9 TDs and no interceptions against the Patriots and Chiefs.

Overall, it’s easy to see why the Bills are favorites to win the Super Bowl and why they open as favorites on the road to beat the Super Bowl champs. The team is loaded with talent from top to bottom.

Bet Now On The Bills

To find a Super Bowl champ listed as an underdog in the opening game of a season, we must go back to 2013.

The champions back then, the Baltimore Ravens, were a 7.5-point underdog against the Denver Broncos.

The curious part about that game is that the Broncos played at home because the Baltimore Orioles played at home that night. And since both stadiums in Baltimore are next to each other, there wasn’t enough room for everybody.

But this is the first in nearly a decade where the defending Super Bowl champions open the season as underdogs.

Current State Of The LA Rams

Besides the Bills’ unreal hype, the Rams lost some key pieces from the Super Bowl team that won the Lombardi trophy just five months ago. And that’s the main reason they are dogs in this fight.

The Rams saw Von Miller leave in free agency to play in Buffalo. They didn’t re-sign WR Odell Beckham Jr. after he suffered a knee injury in the Super Bowl, and LT Andrew Whitworth retired.

Those are three massive contributors that are no longer with the team. But not all is bad news for the Rams.

The team signed Seahawks legend Bobby Wagner to play in the middle of the defense and replaced OBJ with WR Allen Robinson. The ex-Bears WR expects to make a massive jump on his game with Matthew Stafford under center.

And all in all, they still have the best player of the 2021 season. The triple-crown winner WR Cooper Kupp still is uncoverable in any situation.

Kupp was the Rams’ MVP all season, including the Super Bowl, where he showed how unstoppable his routes are.

Bet Now On The Rams

Against any other opponent, I would say it’s disrespectful to have the Rams as home underdogs to open the season, but not against the Bills.

Buffalo has put together a roster where it’s Super Bowl or bust at the end of the season. There is nothing in between.

Also, how the 2021 season ended for the Bills tells me this team is eager to get back on the field and compete.

On the other side, there is no real pressure on the Rams. Los Angeles just won a Super Bowl, and while they will try to win this game, it won’t be a big deal if they don’t.

Buffalo should cover the spread by winning at least by a field goal. Their offense has too many tools to think the Rams’ defense can cover all.

Also, a report from training camp mentioned QB Matthew Stafford is dealing with an elbow injury.

The Rams are trying to downplay the news, but you don’t want to go toe to toe with Josh Allen with your QB at a less than 100% capacity.

Best Sites To Bet On The Bills vs. Rams Game

Here are the best NFL betting sites to wager on the 2022 NFL kickoff match. Find more markets to bet on and take advantage of welcome bonuses! 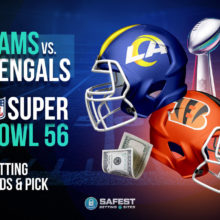 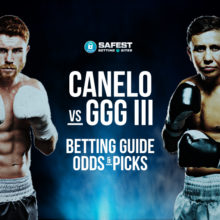