The NCAA Basketball Tournament/March Madness is a single-elimination tournament played by 68 teams in seven rounds, and the penultimate round is widely known as the Final Four.

It has been played annually since 1939 and it is second only to the Super Bowl when it comes to wagering handle. Americans can’t bet on March Madness enough!

So if you are looking to join in on the March Madness Betting fun, make sure you don’t miss our in-depth betting guide to get all the tournament betting strategies, wagers you can place, and our top recommended sites.

All About NCAA Basketball Betting

Wondering who are the most favorites and least favorites to win the Big Dance? Get the current March Madness betting odds below:

Place Your Wager At BetUS Now

March Madness is one of the biggest and best sporting events of the year.

The 2023 NCAA tournament starts on March 13th and will conclude with the Championship game on April 4 at the Caesars Superdome in New Orleans, Louisiana.

If you are looking to bet on the Big Dance, follow our simple steps:

Bet On March Madness at BetUS

Where To Bet On March Madness: Top Sportsbooks

Want to safely bet on the Big Game? Make your way to the top 3 sites perfect for betting on March Madness:

If you’re looking to bet on the NCAA Basketball Tournament this season, the following tips will allow you to place more profitable bets.

This first betting tip has its advantages and disadvantages as a basketball bet, but the NCAA Tournament can be a spot to consider fading the public.

The amount the NCAAB public bets on the tournament is exponentially more than what they wager during the regular season, or during conference tournaments. Interest in college basketball peaks in March.

For that reason, there’s going to be a lot more public money coming in on these games and the opinion of the masses will affect line movement much more than usual.

The public isn’t usually moving the line much when two unranked teams play during a random regular-season game. The opposite is true when a No. 15 takes on a No. 7.

We know the public loves to bet favorites. Savvy bettors should look for spots to fade public teams, particularly those ranked in the Top 25 Associated Press Poll.

Teams that played hard throughout their conference tournament to get to March Madness are another spot you should look to target.

They are often tired, both physically and mentally, and may have a general bias based on their recent performance.

Betting Tip #2Performance Down The Stretch

Another pitfall you should avoid falling into is the trap of weighing overall record too highly when handicapping NCAA basketball games or evaluating teams in the tournament.

The overall record does matter, but how the team is playing coming into the tournament (last few games and conference tournaments) is perhaps something to weigh a bit more heavily when it comes to predicting performance.

Most tournament games are effectively road games for both teams but, depending on the location, one side may have an advantage.

As discussed later in this article, that advantage is certainly priced into the odds.

Watch Out For The Traveling Fatigue

However, fatigue from traveling can still be something to keep in mind. Many schools travel a considerable amount of hours for their first game of the tournament.

In many cases, this also after finishing out a conference tournament. This can undoubtedly add up to tired legs and missed jumpers.

In fact, if we’re going to look for something from the regular season, it would be road records. The environment of a tournament game is essentially a road game, for both teams.

That doesn’t make a lot of sense on its face, but if you consider that both sides are playing on neutral ground, far from their home court – it’s perfectly logical.

One of the most crucial march madness betting tips and most often overlooked is bankroll management.

Being super into the tournament from a fan perspective is excellent, but sometimes that translates into betting too many games. Just because it is the tournament, it doesn’t mean you need to bet more.

Manage your bankroll correctly and look for advantages in the odds. Don’t bet for the sake of having action.

Defense and rebounding in NCAA basketball are essential and it is another March Madness sports betting strategy we recommend. That should be obvious, but there’s a reason we should focus on these areas when evaluating our NCAA tournament betting ideas, compared to offensive firepower.

For one, most of the teams don’t know each other or haven’t faced off in the regular season. Offenses might not translate well against specific defenses.

What may be a strong point against the competition in the regular season, may suddenly become a weakness in the tournament, depending on the matchup.

Offensive firepower also just simply isn’t as consistent as defensive intensity. On some nights, the shots just aren’t falling. There is an element of luck to the offense, while a strong defense can be played much more consistently.

The same goes for rebounding. Sure, there are going to be times when a team is going to be overmatched on the boards, but consistent rebounding leads to second-chance buckets and fewer opportunities for opponents.

Teams that have consistently played solid defense and have rebounded well offer more consistency and predictability when it comes to handicapping a game.

This seems to be a mistake of just about every amateur sports bettor when it comes to wagering on March Madness.

Every year, there are one or several teams that happen to play in a region that is close to their home court.

This makes it much easier for fans of the school to travel to the game. NCAA basketball bettors, for some odd reason, don’t think this is factored in by the oddsmakers.

You’re playing right into their hands regarding public bias and the fact that one team may have more fans in the stadium compared to another. This is something that is integrated into the opening line.

Our last March Madness betting tip revolves around tournament trends. They should be taken with a grain of salt.

Trends don’t usually mean much, but there have been some historical trends with seeding position in the tournament that can be looked at for potential betting opportunities.

No. 5 Seed – The Eternal Underdogs

This doesn’t take into account against the spread numbers, but the No. 5 seed is always going to be underdogs and sometimes large underdogs. At least one No. 12 seed has won a game in the tournament for the past 20 years.

There are some other matchups to look at, but none of them are overly conclusive. No. 9 seeds hold a slight advantage over No. 8 seeds, but these games are usually very evenly matched.

If you are new to college hoops betting, we recommend you read our NCAA College Basketball Online Betting Guide.

When it comes to the best March Madness bets, there are a host of wagers available aside from traditional bets (such as sides, totals, and moneylines).

NCAAB prop bets are wagers that are not related to the final score or outcome of the game (which team wins or loses and by how much) and are also available for March Madness.

Player props are like team propositions in that they are mostly totals, such as the number of points a player scores in a game, or his number of rebounds + assists.

There are many different futures for the NCAA Tournament, with the most common being which team will win the National Championship.

NCAA Basketball Futures Bets markets can cover all parts of the tournament, such as if a team will make it to the Sweet 16, Elite 8, and Final Four.

Bettors will also be able to wager on which teams will win each region of the tournament and more.

Live betting or in-play betting during March Madness is about as good as it gets for sports bettors. Sides, totals, moneylines, and even live player props can be wagered live.

March Madness features so many games at once that live betting is one of the best ways to wager on the tournament.

Moneylines are wagers on which team will win the game outright. There is no point spread with moneylines. Bettors only need to pick the outright winner of the game.

Moneyline odds are expressed in American odds format, such as -120 and +140.

Spreads are the handicap between both teams, such as +6.5 and -6.5. Gamblers can bet on either side, the favorite or the underdog.

This can also be expanded to first half or second half totals.

If you love college hoops, laying down a bet and encouraging some friendly competition among your friends during March Madness is a great way to enjoy the tournament.

When you have gotten a group together, you can print our March Madness 2023 bracket. 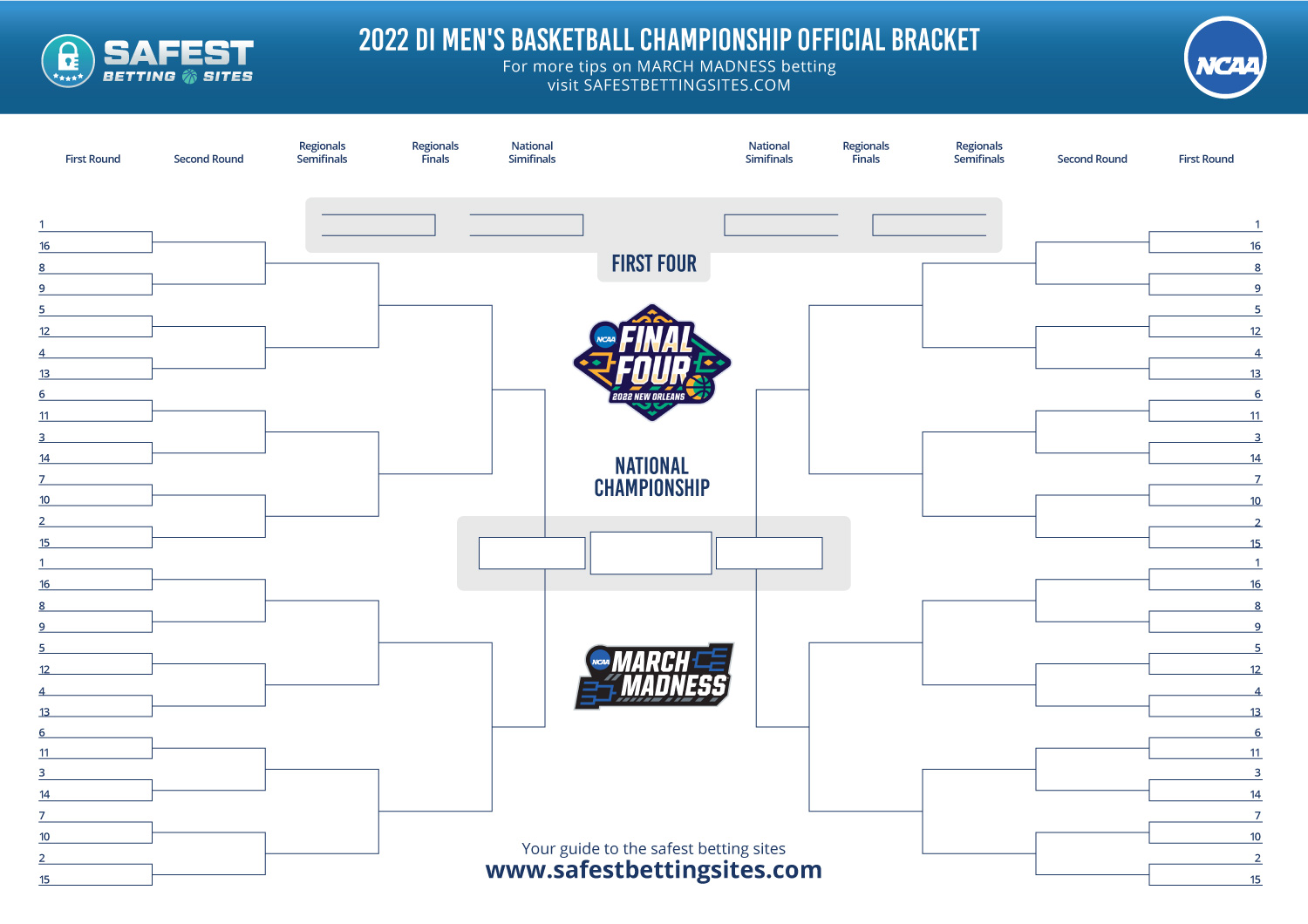 Bet On March Madness At...

Bet and Win Now
No Thanks, Download The Bracket

Back then, “The Road to the Final Four” wasn’t much of a road at all. For the first 12 years of the tournament, only eight teams were invited to play.

It wouldn’t be until 1951 that the number began to grow. Over the decades, it expanded further, and in 2001, the tournament was expanded to 65 teams, with a “play-in” game for the 64th and 65th seeded teams.

The last expansion to the tournament was in 2011 when it expanded to 68 teams, which added another play-in game. Only time will tell if the tournament expands further.

Based on the increased public interest and television ratings, that is always a possibility, and with that, more betting opportunities arise.

How Does March Madness Work?

The tournament is single-elimination and begins with 64 teams. There are several rounds to the tournament and teams get whittled down to the Sweet 16, Elite 8, Final Four, and ultimately, a National Title game that crowns a champion.

Where Can You Watch 2023 March Madness?

Every game of the tournament is televised these days. They are broadcasted on a number of networks, including CBS, TruTV, TNT, and TBS.

Which Team Has Won The Most March Madness Tournaments?

Make Sure To Check Our Full NCAAB Betting Guide